It’s been a few weeks or more since I last blogged. But I’m back to feeling I’m blogging the same thing over and over again – the result of my TR’ing I suppose. Well guess what? That’s mostly going to be the same in this blog too 🙂

If it’s any consolation I have lots of pictures 😛

As I mentioned in my previous post, I wasn’t happy with the performance of my artificer, Othala. This was especially true as I compared him to Hymm, who is currently running his third and last artificer life. The difference in damage was very obvious. I realise Hymm has all those extra lives, and to be perfectly honest probably much better gear, to rely on – but I was still unhappy about it.

So Othala became a sorcerer. He’s not been running too much over the last month, as the guildie that we run with is on US time and doesn’t get to join up with us much during the week. So he’s currently only level 17, about to hit 18. But, with 2 sorcerers and a wizard running together I felt I could switch things around a bit….

Yep, back from the dead (or at least from alt limbo), my intended completionist who got shoved to one side on his third life, is now up and running again. Rach is running her cleric-now-sorcerer Rowendar with Fyrne and it’s working quite nicely. She will switch to her monk, also stuck at level 17, to run with Othala & co, giving us a slightly more rounded party. Hopefully. 😀

Fyrne is a pure fighter and I’m switching him between two handed fighting & tower shield/bastard sword as the situation demands. Unfortunately he hasn’t really been played much since epic destinies were introduced to the game and it appears when I last played him I started in Exalted Angel. Not much use to my fighter, so I have some work to do there. Fortunately Divine Crusader is only a few levels away 🙂

Hymm, meanwhile, has been doing great 🙂 He has hit level 28. Rach & I are planning to eTR then TR into barbarians hopefully within the next few days. I just cannot decide whether to go pure barbarian or throw a few levels of rogue in for some trapping ability (and as BonnieBew pointed out, making him a brogue :D) 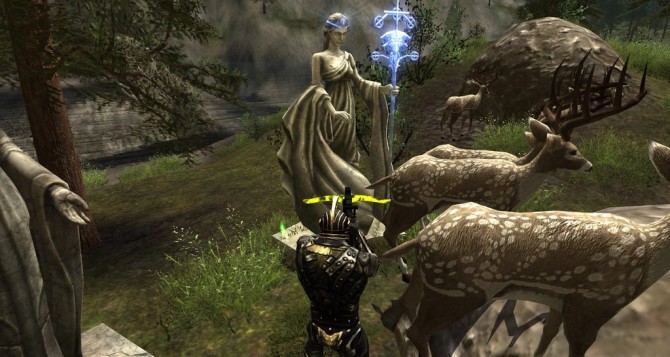 For some reason, the wildlife in Stormhorns really liked me 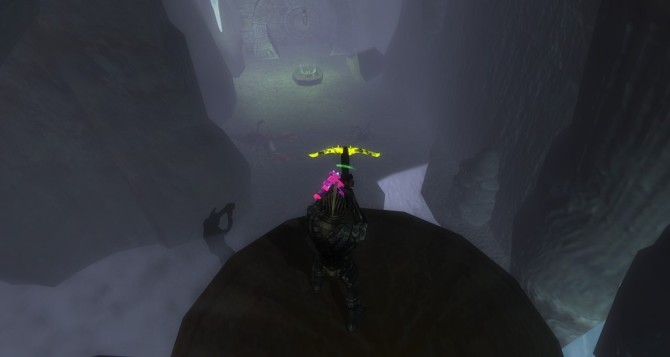 Thanks to my guildies at the weekend I obtained the last of the Khyber Binding Fragments I needed from Lord of Blades & Master Artificer to enable me to craft an alchemical quarterstaff. I’ve only crafted tier 2 for now, leaving it at a minimum level 18 usage. I also crafted a Tier 2 Thunderforged quarterstaff, so I think I now have a good range for all further stick build lives going forward 🙂

So the big thing for DDO recently is Update 25 and the new quests. Obviously. Rach & I duo’d Part 1 & 2 on eH when it came out, as no other guildies were around. We had to do one each evening, as we only get a few hours to play and couldn’t fit it all in at once. At the weekend we ran them on eE with guildies and had a slightly different experience… Thoughts below, there may be spoilers so look at your own risk 😀

Waiting in the Hall of Heroes before our eE guild run 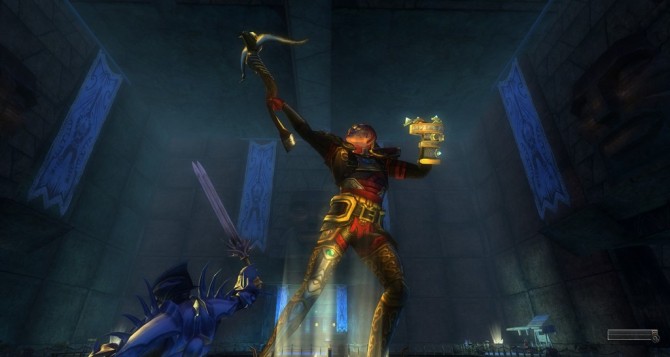 There are some cool statues

Part 1 was really straightforward on eH. We had no deaths and we really enjoyed it. We covered pretty much the whole area and just kept a steady pace. On eE it was completely different. It was a full party of 6 and we started out fairly well, the occasional death being caused by a sneaky champion. But then we went through a door, rounded a corner and found ourselves stuck between approximately 5 or 6 large groups of orcs. One of the groups appeared behind us after we had run up the corridor which had no adjoining corridors. I discovered later that mobs were spawning directly behind us as we ran up some corridors. 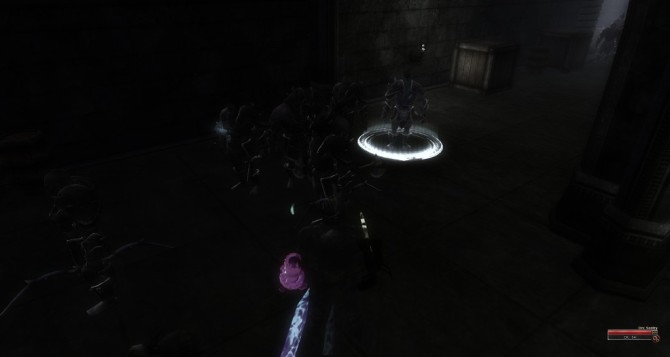 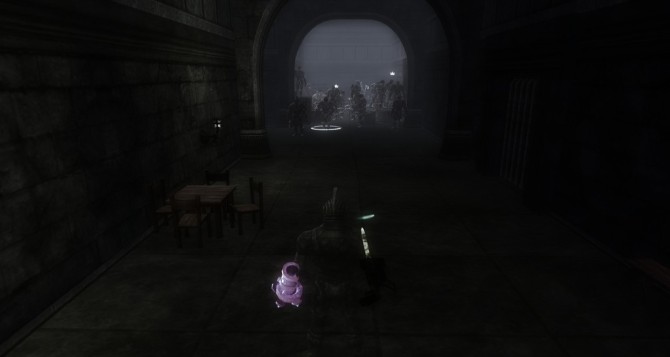 Guys, I found some more!

Part 2 involved a lot more deaths. When we ran it on eH the deaths were all in the end fight. On eE we had the same issue as Part 1 with mobs appearing directly behind us when we passed a section, which was not helped by crippling lag (presumably from the sudden appearance of the mobs) so we wiped before getting to the first elemental area. I stayed in to hold the instance open while guildies regained health & repaired. And to watch while all those mobs just disappeared…..

Anyway…. we only ran three elemental areas between the two runs. We just didn’t have the time to run all of them. On eH we ran the air and water areas. Air took a while to find the node, lots of passages to explore. In Water we were pretty lucky and found it fairly quickly. After we found a dragon, which was fun 😀 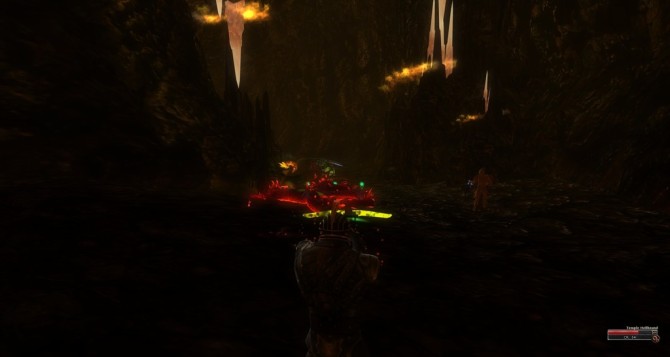 Running round the fire area 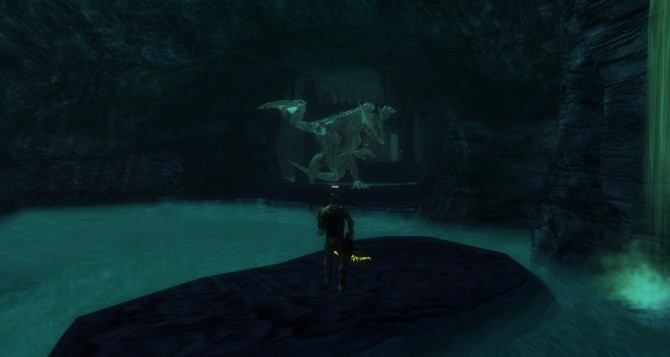 There’s a dragon in the Water area – I wonder if there are dragons in the other areas too?

We also managed to find the node in the eE run in the Fire area fairly quickly. I’m going to assume that, like most DDO quests, the nodes will have certain places they can be found. Eventually I guess we’ll have it all mapped out on DDOWiki and it will take nowhere near as long to run these areas. But for now, it’s fun to have somewhere new to explore – and I like having quests that are not all about the XP per minute.

The end fight was challenging! On eH we had a few deaths while we got into a rhythm but overall it wasn’t too bad. On eE we had a lot of deaths as we did the same thing – mainly due to Zuggtmoy having a very nasty Earthquake! But again we got a routine in place with the class combinations we had in party and eventually finished her off without to much trouble.

Getting ready to take on Zuggtmoy

Loot may be the only issue I have with the new quests. To be fair, it will probably take me a while to get the mushrooms collected that I need to upgrade a weapon so I won’t know until then, although I did have a quarterstaff drop to get started on. But we a) have yet again another set of collectibles and b) I’m not sure if I’m not better off just waiting for epic Greensteel and use Thunderforged for now. Only time will tell…

Wil Wheaton was the surprise DM for the Temple of Elemental Evil and I’ve seen a lot of yays and nays for him. I’ve always been a fan of Star Trek, and The Next Generation is my favourite of the franchise (Patrick Stewart was an inspired choice for captain) but Wil Wheaton as Wesley Crusher was always just a bit annoying… However, I do really like the Table Top series he does as part of Geek & Sundry and I loved him as Fawkes in The Guild. I think, as an obvious lovers of games, he was a good choice to get a bit more publicity for DDO and he does a great job as a DM.

Overall I really like the ToEE. The two quests are large but you don’t need to explore everywhere. I’m fairly sure people will soon be running the quests much quicker. But hey, this is Dungeons & Dragons – we’re all about the exploring dungeons & fighting dragons 😛 Well, maybe you’re not, but I like the change. The areas have some really good looking features and I think it’s well worth putting some time aside to run these properly at least once.