It’s been a slow few weeks with DDO. You remember how I said it took 3 weeks for Hymm to level from an iconic 15 to 28 last life? Well, not this life! I’ve been running a druid/monk/fighter PDK and I’m almost at level 20. For some reason I have not enjoyed this life. I’m still having a hard time working out why. The damage is good, I have some healing ability, but I just don’t seem to be enjoying it. Well, maybe I’m a bit bored of running the iconics, as I am now on my third iteration. Running those same quests can get a bit monotonous eventually 😀 I am thinking of taking a break from the iconic lives on my next TR and iTR’ing back to level 1. Maybe that will break it up a bit.

Meanwhile, I’ve been spending a bit of time with a few of my other characters. A few weekends ago I dusted off my level 23 artficer, Othala, and ran him for the weekend. I’ve eTR’d my tank, Grypp and am slowly levelling him back to 28. And mainly for our weekend high level guild runs I’ve been playing my monk, Dimachaerii. I realised a few weeks ago he only had about half his Epic Destinies capped so I’ve been working on those.

He’s now just got Magister to finish them all off. This weekend we ran eH VoN 1-5, eE VoN6 and then 8 manned eE Chrono. Good XP for a few hours (400K+ ?) and his last destiny is almost capped. I should get him finished this week/next weekend, which will have him ready for when U21 gets to us 😀

Waiting for the Marketplace to explode

This weekend has been another Elder Scrolls Online beta weekend. And since the NDA has been lifted I can talk about it and post a few pictures.

I haven’t played it extensively, I only got a few hours play time, so I can only really give general impressions. For starters if you have played any of the Elder Scrolls series, you’ll be familiar with how the game looks. If you haven’t – well it looks great 🙂 Initial character creation is very detailed, you could spend hours just getting your perfect look. But since I knew I only had limited time available I just hit ‘randomise’ until I got something I liked. I created a Khajiit Templar. So in DDO I’m currently a dog, in ESO I’m a cat 🙂 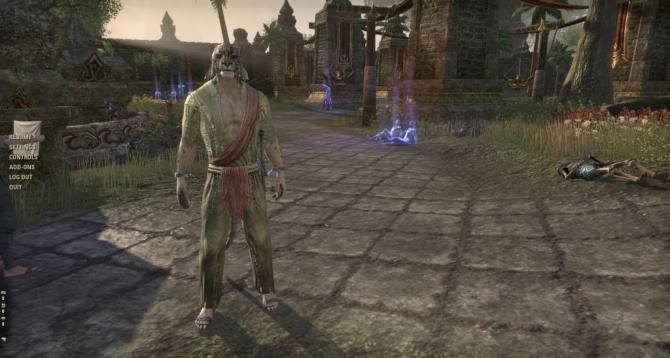 As usual with Elder Scrolls, you start in a prison. Since I had already played a previous weekend beta I just blitzed through the ‘intro’ quest and in order to spend more time in the starter area.

I love this picture – and I took it by mistake!

I spent a few hours with Rach running around the island, killing things, seeing the sights and getting a few missions out of the way. It was fun, the voice acting for the quests is very good, but you don’t get your own instance of an area. You are running around with everyone else, trying to kill things like in a lot of MMO’s. Which is one of the things I don’t like. It never seemed to be an issue though, I obtained the quest items I needed without any trouble from the kills. Unfortunately I didn’t get a chance to try the crafting but it does look like that will be quite diverse & involved.

OK so that was the briefest review ever 🙂 I liked the game & I would consider getting it – but it’s not the game to lure me away from DDO.