It’s been my usual week of DDO, but I have had a few ‘first times’ happen.

Monday & Thursday was Orien night as usual. Micki & Dom got me flagged for the Titan raid, which I’ve never done. In fact, as a rule my guild hates the Restless Isles. The only mission we ever do out there is the Shrieking Mines, so finishing Ghola-Fan was my first ‘first’ 🙂

The rest of the week has been spent running my TR Hymm. He’s now 19, closing in on 20. My other two guildies have hit 20 now. We’ve moved onto the missions in Amrath, and dragged legend out there with us on Sunday afternoon as he has recently picked up the pack. His bard did a lovely job of mes’ing the trash in Sins of Attrition 🙂

Weekend with the Defense Guild as usualW. Saturday night we ran an eN CitW that got a bit hairy at the end but we were a full party this time and got through. No loot though. We then went on to run eH VoN5, which went very well, but eH VoN6 was weird. We did the bases as usual, though they took longer than normal. Then when we went to run Velah – we were locked out. You see, the Defense Guild have alternates that they run, and had ‘parked’ them just inside the entrance.

So, the rest of us were locked out while the DG tried to kill Velah with an artificer, ranger & monk. It was a good try, but… we decided to just rerun VoN5 on eN instead 🙂 Which worked out nice for me because the extra xp capped my 4th ED of Unyielding Sentinel (I realised after capping Shiradi I never actually finished US).

We finished the night off with a quick training run of Abbott (I suck at running in a straight line….) and a completion of it.

Sunday evening was my next lot of ‘firsts’. After a few Eveningstar missions we ran Master Artificer & Lord of Blades. I haven’t done either of those before so it was great to be trying something new 🙂 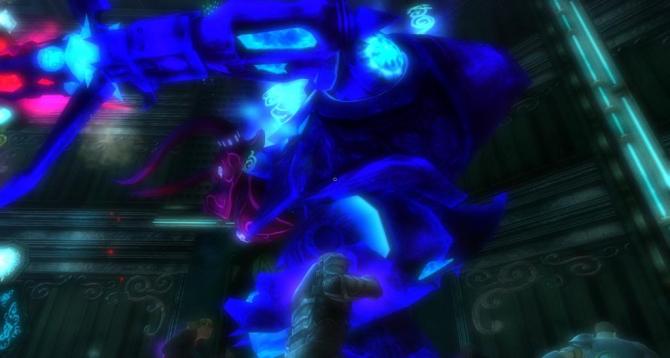 Master Artificer seemed quite straightforward, although I think we ran it on normal.. maybe eN, not sure! I just wanted to run the raid 🙂

Lord of Blades I died a few times because I missed tells for the attacks. Note to self, it is not helpful to have TeamSpeak, in game chat and someone in the same room all talking at once 🙂 Other than that, I think I just need to run it a few more times to know what I’m doing. And we ran that on eH I believe.

OK that’s me done. A quick blog this week, I have lots to do. Also, I forgot to put the pictures I took into my dropbox account. If I get chance later I will add the pictures 🙂

7 thoughts on “This Week and Some Firsts”