This post follows on from my last TR of Hymm

Hymm blinked. A moment before, he had been stood in the Crafting Hall in House Cannith. Now he was looking at a hedge.

Slowly he turned around and realised he was in Kruz’ enclave in House Jorasco. “What…?”

“Kruz, what am I doing here?” the half orc bellowed “I was busy!”

Kruz looked at Hymm in disgust “Busy? For the last two months, all you have done in spin your heels in the crafting hall. No, my friend, you need motivation”

Hymm thought about this for a moment. Since his transformation into a half orc his thinking abilities had definitely… decreased… but after a moment he looked up hopefully “You will make me even more powerful?” he asked, flexing his massive arms.

Kruz smiled, but there was a slight hint of maliciousness to it, though Hymm did not notice. “Yes, you will be more powerful, but perhaps.. not quite in the way you hope.” Before Hymm could ask what he meant, there was a flash of light – then everything went dark.

Hymm came to on a beach. He groaned to himself, raising his head from the sand, then stopped suddenly as he saw that his arm had shrunk. Considerably. He frowned, raising both arms and looking at them, then staggered over to a small rock pool and looked at himself in the reflection. Small pointy ears, tilted eyes, sharp features. He snarled. “Shavarath take you Kruz! A half elf!”

After cursing Kruz under his breath for a few more minutes he looked up. He recognised the beach. He recognised the small halfling stood further down the beach, waving at him & grinning. Hymm sighed. “OK, lets get this over with…..”. He headed towards Jeets…. 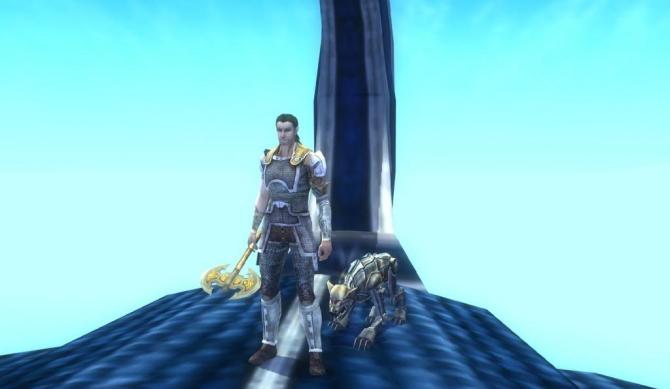 Three members of the Heroes of the Dragons Wrath, three members of the Defense Guild, on Sarlona, are taking advantage of the bonus XP weekend. We are all TR’ing chars that are at least 3rd lifers and we intend to hit 20 by Sunday. (I should point out, we’ve all bought Otto’s Boxes from the store, so we will be jumping from 8 to 16). I hope to get another blog done after the weekend to show how it went 😀