This is just going to be a quick run down of my weekend. There’s nothing really exciting, though I do have some fairly nice pictures if you want to just look at those and skip the text 😛

Friday night, my guildie Row wanted to run a Shroud and asks if I’ll put one up. She was wanting to craft an electrical absorption item as we were planning to run eE Tor and possibly FoT over the weeekend with the Defense Guild. So, I throw up one for ‘Hard’ and it fills fairly quickly. Row agrees to solo heal, she’s done it before and it’s not really a problem, especially when most of the group are level 23+. The run is reasonably smooth. Part 1 is very quick, part 2 I had people not listen when one of the red names was killed too quickly and we ended up with two more red names dead and having to pull them again. Maybe I should shout more? 😛 2nd time around is much better. Part 3 was fine, part 4 we had our only ‘lowbie’ (level 19) die and I think that was the only death apart from the transition to part 5. Unfortunately, the Shard of Power Row needed didn’t drop for her, so we ran a quick eN Devils Assault, dragging Legend with us who had joined us for Shroud. And happily, the shard dropped 🙂

Saturday I got my own back and dragged Row, running her monk, to farm Adamantine Ore from A Relic of the Sovereign Past. 4 runs each on casual and I had my 100 ores that I needed. I’d picked up a set of returning adamantine throwing hammers and a mininmum level 20 adamantine bastard sword on the Auction House, so crafted them both as +5 Holy Burst of Greater Construct Bane. That was my tank all prepared for Lord of Blades.

When the Defense Guild started to appear later on Saturday afternoon, there were three of us from our guild lurking around just finishing things up. And with 3 from DG we were good for missions. We spent an hour or so running Purple Dragon Knight favour before breaking for food. When we got back, we moved onto the serious stuff for the night.

First up, eH CitW. This ran much better than the one we ran the previous week. Better DPS and a really nice run all round. For once, I didn’t get kicked off by the legs either 🙂 I finally had a commendation drop for me (that raid is tight!) and we had 5 named items drop! (Pinion, Cleaver, Balizarde, Celestia, Sireth) Still no Nightmare for me ‘sigh’. 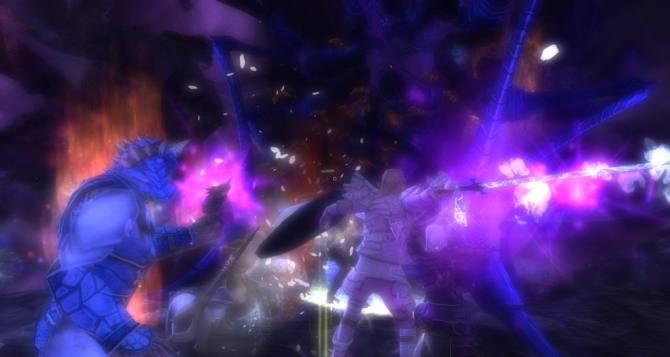 Next up was our usual eN VoN5 & eH Von6. We’ve got this down to an efficient run now, and apart from a slight case of mistiming with throwing things at one of the levers….

We finished up with a 6 man run of eN LoB. This was why I had crafted the adamantine weapons earlier, as this was my first attempt at tanking the Lord of Blades. Again, it went pretty well. Tobril does a greatr job of organising us, I managed to more often than not recognise the LoB’s stun move. I did die twice, chained then knocked into the water.. I should have yelled louder for heals 😛 Although, I realised after we had finished I was in US ED and I have Lay on Hands – dammit I could have healed myself! lol Hopefully I will remember that next time.

Sunday when I got home, Row was running around with our latest guild recruit, @stretchicus, so I jumped on with my level 25 Grypp to finish getting my journals from the Demonweb. As the DG members appeared we were all running various different things and didn’t really get organised until later.

Faeylinn from the Defense Guild got jumped by a lot of giants!

eE Tor was the next request for things to run over the weekend. We’ve now run this together so much we have a nice rapport going, everyone knows what they’re doing/supposed to do and the first part was finished quickly & easily. On to the dragons & giants. We have started running them in the order black – white – blue. Easiest to hardest.

So, black dragon, no real problems. We have locations for the arcanes/divines to keep them reasonably safe. And I pulled the rune arm The Turmoil Within. I guess that means I need to start playing my artificer more….

White dragon, again we have a fairly safe location for the arcane, so Samius was able to pull the dragon away and start on him, while the rest of us prepped the giant. Quick switch to help get the dragon down and – done 🙂 And I believe the Chill of Winter dropped in there for someone. 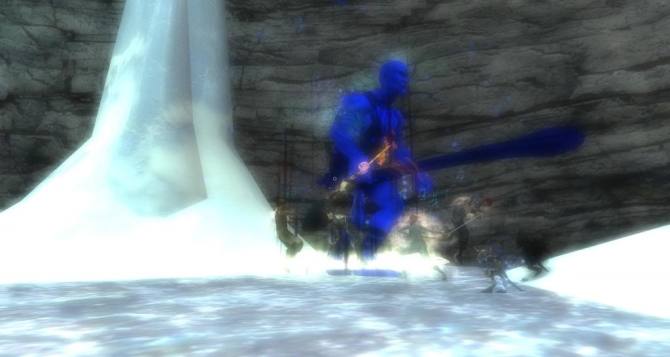 Blue dragon – our nemesis…. we’ve run the Tor quite a few times and this one always gives us trouble. We had all made an effort to get electricity resist items/buffs/ED options. Again, we have a perch for our caster, but it’s not as safe in this room – you still get hit by the electricity traps. But it does stop you from getting thrown around by the elementals 🙂 Attempt 1: keep the dragon busy, prep giant – then prep the dragon. This didn’t work. Recall, rebuff, retry. Attempt 2: DPS prep giant, arcane (Samius) starts prepping dragon… generally just bad luck and we all die. Recall, rebuff, retry. Attempt 3: same as attempt 2 but FASTER!! And yay! It worked.

After we’d done, Tobril had to go eat so Samius switched to his bard and we blitzed the first 2 missions from the 1st chain in Evening star before calling it a night.

When I look back at this, it feels like we didn’t get much done on Sunday. That may be because Samius spent soooo much time sorting out the buffs on the Defense Guilds new airship… oh – did I mention they hit level 80? 😛 Congratulations guys. And no, we’re still not ready to come over to your guild 🙂

And to finish, another great view I found while running around The High Road area.