If you’re looking for a blog about DDO you need to move right along – not happening this week 🙂 For a change this is a more personal blog.

If you follow me on Twitter then you will already know this. Last week my partner, Rach, & I went to New York for 5 days. It’s the first time I’ve been to New York (well, I passed through JFK on my way to San Francisco once but I don’t think that counts!) and her first time in America. This is my way of recounting the experiences, sharing some pictures and possibly providing a bit of a newb guide 😀

The holiday actually started with a ‘local’ event i.e. in the UK. A few months ago I bought tickets for the Alter Bridge gig in Manchester. If you don’t know who Alter Bridge are, you should be ashamed of yourself and go click on that click I just provided. Or this one. Go on, I’ll wait 🙂

They are one of my favourite bands (vying for 1st place with Within Temptation & Lacuna Coil) and are a great rock band. The gig also had support from Halestorm and Shinedown.

I’ve never heard Halestorm live. In fact, I only started listening to them a few months ago after a friend gave me a link to a video of their cover of Heart’s ‘All I Wanna Do’. But the lead singer has a great voice. More importantly, it is still that good when she sings live. They did a great spot, only short but very enjoyable.

Shinedown are another band I love so I was looking forward to their set. Again, they sound fantastic live, which in my opinion is the sign of a damn good band – if they sound shitty live (I’m looking at you, Evanescence) then they need to work at it! But although it was a good set – they talked WAY too much! I don’t pay to come and hear you talk, no matter how good what you are saying is, I came to hear you sing.

Finally Alter Bridge arrive. I’ve watched them live for every UK tour they’ve done I think. And they failed to disappoint. Myles Kennedy has a fantastic voice, but it was also really nice to hear Mark Tremonti, lead guitarist (who has recently done his own solo album), sing the one song from the new album that he does the lead vocals on. There was a nice selection from all the albums, although I would have loved to have heard a few more from the new album, Fortress. But maybe I’m just greedy 😀

We stayed overnight at a hotel by the airport. It made sense since we were flying out the next morning and had to be checked in fairly early. We had the usual panic – had we got all our paperwork? Passports? Did I miss something I needed to print off? But everything was fine and waiting around didn’t seem that long. Next thing we knew we were on the plane and on our way. 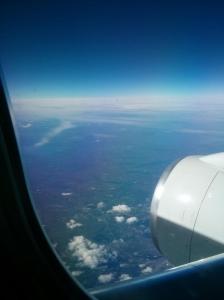 Nothing eventful on the flight. Landed at JFK about 30 minutes ahead of schedule and getting through customs was quick & easy. Grabbed a cab outside the airport and headed for our apartment.

Tip: use the regular yellow cabs outside the airport if you’re not intending to use the trains/subway for getting to where you are staying. It’s a flat fee from the airport to any destination in Manhattan, rather than metered.

A friend at work advised against getting a hotel room, recommending some websites she uses to rent apartments instead. We rented a studio apartment in East Village. You get a bit more space for your buck that way 🙂 It was fairly basic, but really all we needed was somewhere to sleep. After dropping off all our stuff it was 3PM EST so we decided to have a look around the area and find somewhere to eat. After wandering around we just happened to find ourselves in a local bar chatting away to the guy serving the beers and getting recommendations on places to eat. After several pints, followed by pizza, the day caught up on us so we headed back to the apartment and crashed out.

First thing we did was get a Metro card to use for getting around on the subway. Each subway trip costs you $2.25, we got a 7 day unlimited pass for $30. That way we didn’t have to worry about how many trips we made or getting cash for each journey. It made things a lot simpler 🙂

Tip: not all the subway entrances cover lines going in both directions. Check the map before swiping yourself through, as you have to wait 18 minutes before you can swipe your metro card again

First stop was Central Park. We took the subway up to the east side of the park and just.. wandered 🙂 After going around in circles a few times (no really – we did. I think a compass might have been useful) we found our way across to the west side of the park and headed off to the American Museum of Natural History.

I don’t know what I expected from the AMNH. I’ve been to the Natural History Museum in London and I suppose I expected something like that. Maybe a bit smaller. Um, nope, the place was huge! I keep forgetting – everything is bigger in the US 😀 We pretty much spent the rest of the day in here and still didn’t see everything. 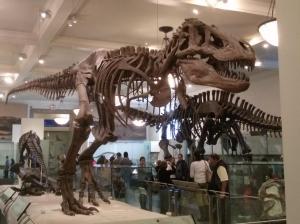 We got up early (again) and headed for the Staten Island Ferry. This takes you past the Statue of Liberty. We’d heard that you cannot actually get inside the statue at the moment, it is shut for repairs or something, and we didn’t feel like paying for a ferry to take us to the island to see it from the outside when we could do it for free. Hey, I’m from Yorkshire – we’re known for being tight with our money 😀 When we got back to Manhattan we saw a sign for the National Museum of the American Indian and decided to go have a look. Guess what – it was free too 😀 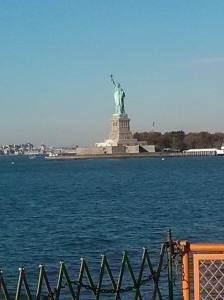 Tip: so, OK, getting to New York is not the cheapest thing ever – unless you’re already in the US. But you don’t have to pay a fortune once you get there. Check out the different things to do & work to your budget.

After that we wandered around the Lower Manhattan area for a while. We did pass the World Trade Centre memorial site but didn’t go in. I don’t think I could have, to be honest. I felt myself tearing up just stood outside looking at it.

From there we walked up to Chinatown. I should have really sorted out some maps for this blog, to show how much walking we actually did. It was a lot!

We can’t really come all the way to New York and not go up the Empire State Building – right? So that was Saturdays plan. Early start, breakfast and subway, everywhere was a lot quieter than we had seen so far. Looks like 8am on a Saturday morning is New York downtime 😀

Until you get to the tourist spots! Though I think it would have been much worse if we’d left it until later in the day, the queues and observation platform were still busy. We did manage to get some good spots for looking at the views though.

After getting back to street level we headed off to Macy’s which is just a few minutes walk away from the Empire State Building. I’m not really much of a shopper. Hell, I buy t-shirts from teefury and Levi’s from Amazon when I need them! But I could have quite happily spent a small fortune in there 😀

Tip: if you go to Macy’s be sure to take your passport. Go to the visitors centre (clearly labelled) and get yourself a visitors pass. This gets you 10% off all purchases.

There is only only so much shopping I can take though. We moved on to Times Square, which was packed full of people. It’s quite a sight – but we’d done a lot of walking by then (again) so when Rach spotted the Hard Rock Cafe we decided to go for a pint. Sat at the bar we ended up chatting to a South African guy who was over on business and who insisted on buying us double JD & cokes. And then wanted to move on to tequila’s. He was a bit hammered 😀 and the lass behind the bar had decided he had had enough to drink. We said goodbye and left him trying to get more drinks out of the her (last I saw she had given him a large glass of water). 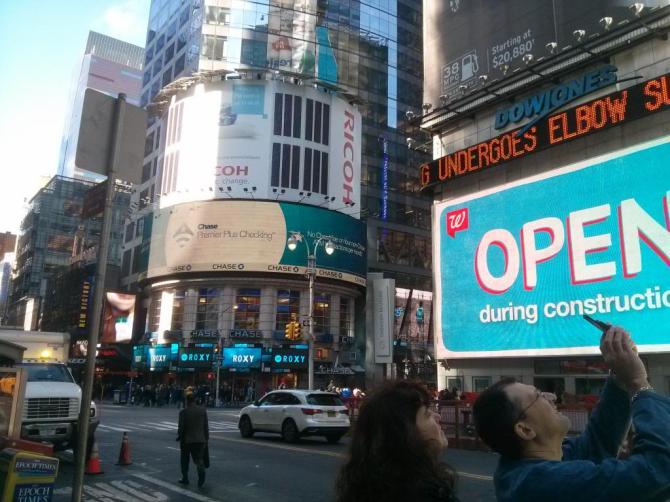 We had to be out of the apartment by 11am, so we got some breakfast at the local diner then got all packed up. The apartment owner was really nice and let us store our luggage in her office until we came back for it at 4pm as our flight wasn’t until early evening.

We decided to spend a few hours at the Metropolitan Museum of Art. Like the AMNH, we underestimated how much there was to see. We could quite easily have spent a full day there. Well, if you like that sort of thing 🙂 Since we didn’t have all day we decided to hit the sections we had main interests in. I wanted to see the Roman/Greek and Egyptian sections, Rach wanted to see European, Medieval & African sections. And each of these areas were big, so we specified how much time in each. I think I could have spent all day in the Egyptian section alone. In my teens I was very keen on archaeology & wanted to go into Egyptology specifically (and yet I ended up as a computer developer – go figure). 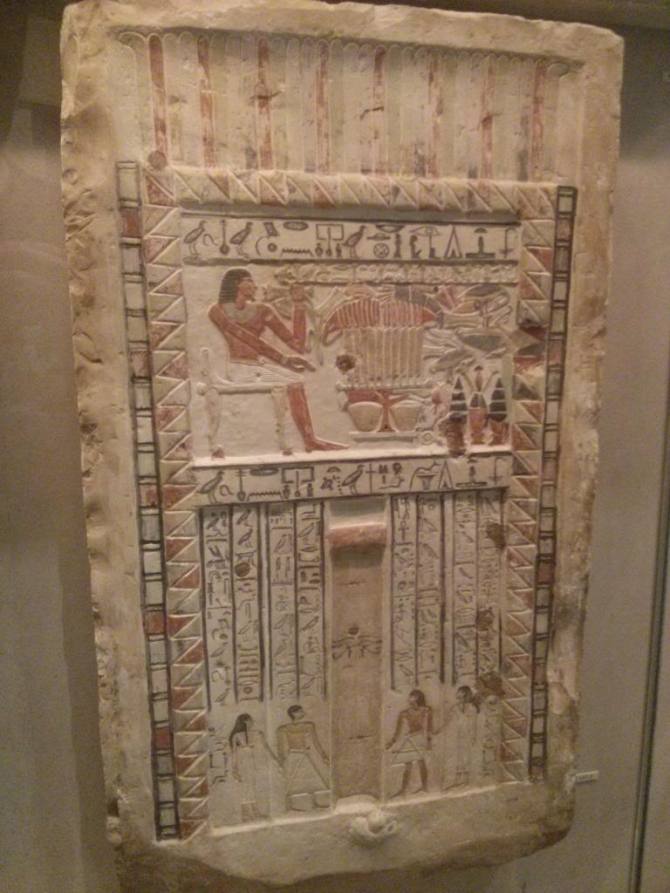 Coming up to when we had to start getting back, we headed outside and grabbed a couple of gyro’s for a late lunch from one of the many street vendors outside the museum. Yummy 🙂

When we got to JFK airport we were advised that there was a large storm over the UK and all local flights out of Heathrow were being pushed back. So our connecting flight was moved from 8.55am to 1.10pm. The flight over was great. the British Airways plane was much nicer than the American Airlines planes we had on the trip to JFK, with individual TV screens for each passenger and a large choice of movies to watch. Unfortunately I didn’t get to spend the whole flight watching movies, as I was driving when we got back to the UK and decided some sleep would be a good idea. I did watch World War Z though (very good – funny how they edited out the plane crash :P).

Landing in the UK was fun. When they said ‘storm’ it turned out to be strong winds. Coming down was like being on a rollercoaster… and we ended up pulling up from the runway just before touch down and circling for 40 minutes waiting for the wind to drop a bit. Once in Heathrow we managed to get our connecting flight changed again to a slightly earlier time so we didn’t have to spend 5 hours waiting around.

It was a really good trip and we enjoyed ourselves a lot. There were a few things we observed while there that kind of surprised us though

OK that’s everything I can think of. Hope I haven’t bored you too much with the blog equivalent of making you watch my holiday slides 😀 Have fun, see you around!