Unless you’ve been hiding under a rock for the last week, you’ll know that U22 Pirates of the Thunder Sea was released on Wednesday for DDO. I’m not going to go into lots of details. Geoff covered a lot of the issues with the new release really well in his blog earlier today – go read that. (There’s even an amusing anecdote about a dog)

But here are my general thoughts on it:-

OK I like the new guildships. They are huge! And I think the art work on the amenities is amazing. But, it just seems like a huge waste of effort. How many of us are using that big button (except for maybe Geoff at the moment… seriously – go read his blog) to just get them all in one go? I feel like some poor designer/artist has spent a tonne of time on something that people will look at for maybe a few hours. It’s a shame. It could have been directed into something that would get more eyeballing…

I’ll be honest, I really wasn’t expecting to like the new update. I’ve never been a huge fan of the quests in there, but the guild ran them at the weekend on eE and I had a blast. I think the last quest would have been great as a mini raid, personally, but even so – I had a lot of fun.

I… haven’t even looked at it 🙂 A few of my guildies are interested in it, one is TR’ing into it very soon (if he hasn’t already) but for now, it’s not on my list, as Hymm is already level 20 on his bard life, so it will be a while before I get around to his next bard life to try it.

And some other stuff:-

You probably know this already, but Lessah & Samius from the DDO Cocktail Hour have started a static group on Argonessen on a Wednesday. Myself and my partner, Rach, have joined them, along with Jerry (Cordovan) from DDO, Raise & Bonnie. The first week was frantic fun 😀 Why not have a look? You can watch from lessah101, samiusgurobo, ddostream, or grimorde. You could even have 4 running at the same time!

Meanwhile, my main character Hymm is, as I mentioned, now level 20 on his bard life (1 cleric, 5 rogue, 14 bard). The 25% XP boost over the weekend came in very useful 🙂 Now I just have the run to 28, which should be loads of fun as I’m running in Legendary Dreadnought, and I suppose I should start thinking about which of the last 4 lives I should do next (paladin, artificer, sorcerer or wizard). Dim has been my weekend character for epics & raids and is now 26. I still miss the ability to do traps, doors etc, but he really is fun to play.

OK that’s all I’ve got for you 🙂 Enjoy this picture of a stunning sunset in Stormreach Harbour. Have fun, see you around! 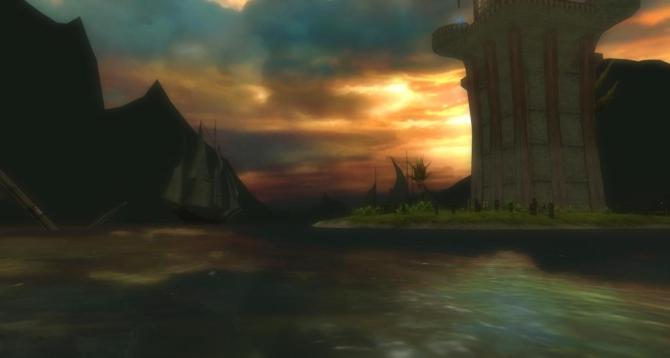 4 thoughts on “Pirates & Airships & Swashes of Buckles – Oh My!”